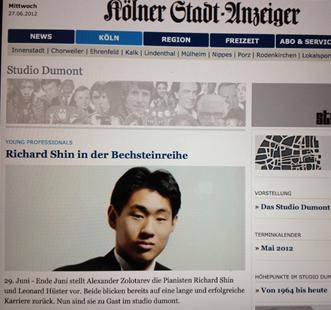 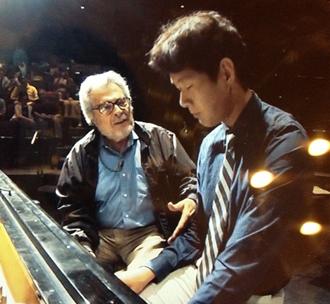 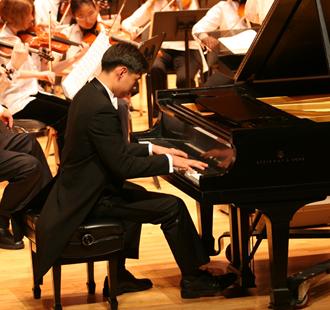 "The young pianist succeeded in nailing another one of his favorites, demonstrating the deft hands that allowed the seemingly never-ending successions of arpeggios, broken chords, to fill the auditorium with sounds." "A Kid at Play" by David Rosenfeld, Gilman Bulletin spring 2012

Young Steinway Artist Richard Shin has established himself as one of the top pianists in his generation. He has already garnered numerous prizes in prestigious competitions, while maintaining a rigorous performing schedule. Richard was the youngest first-prize winner in the history of the Maryland MTNA Senior Piano Competition. He was  also a competitor in the Eastern Division MTNA Senior Piano Competition for two years straight; in the second Year, he was named the alternate Representative. Richard's numerous successes in piano competitions include first prize in  the Jazz and Classical Music Piano Competition, Ithaca Concerto Competition, Lichenberg Scholarship Award, Friday Morning Music Club High School Piano Competition and many others. In 2010 and 2011, he was consecutively named first prizewinner at the American Protege International Competition-including the 2011 Judges Award. These achievements also gave him the opportunity to perform at Carnegie Hall various times. That same year, Richard also won a prize at the 2011 Chopin International Piano Competition in Hartford, CT. Many performance engagement followed, including an invitation to perform at the Polish National Home.

At age 14, Richard debuted with the Cumberland Symphony Orchestra performing the Grieg Concerto. Other performance highlights include solo  recitals for the "Music at Penn Alps" concert series in 2011. He performed at the Asian American Medical Association Conference, the Korean American Scholarship Award Gala, the Mansion at Strathmore, and the Gilman School. Richard had his European debut in Cologne, Germany in 2012. He was featured in the "Young Professionals" concert series by Bechstein Piano. Richard debuted as a Young Steinway Artist in the "Celebrate the Chinese New Year" concert series in 2013 and in the same year performed at the DACOR Bacon House in Washington, D.C.. Last summer, Richard conducted at the Sienna Music Festival in Siena, Italy and also filled the role of assistant conductor.

Richard has participated in numerous master classes. He has worked with world-renowned professors from all over the world. He had the opportunity to study with Leon Fleisher as a first-place winner of Jazz and Classical Music Piano Festival and Competition. He was selected to participate in the Chopin Etudes Master Class at the 2010 MTNA National Conference. Richard has also worked with Julian Martin, Nelita True, Irina Morozova, Sharon Mann, Matti Raekallio, Shigeo and Reiko Neriki, Nikita Fitenko, Scott McBride Smith and Joseph Banowetz.

Richard is a sophomore of the Columbia University in NYC. He is majoring in statistics. He participates in many extracurricular activities, fencing is his recent favorites. He was also selected as a High School Scholarship recipient from the Korean American Scholarship Foundation in 2012. Richard currently studies piano with Reiko Uchida of Columbia University and Yong Hi Moon of the Peabody Conservatory, conducting with Michael Rossi of the Washington National Opera. His former teachers were Betty Hadidian , Marjorie Lee and Scott Beard.